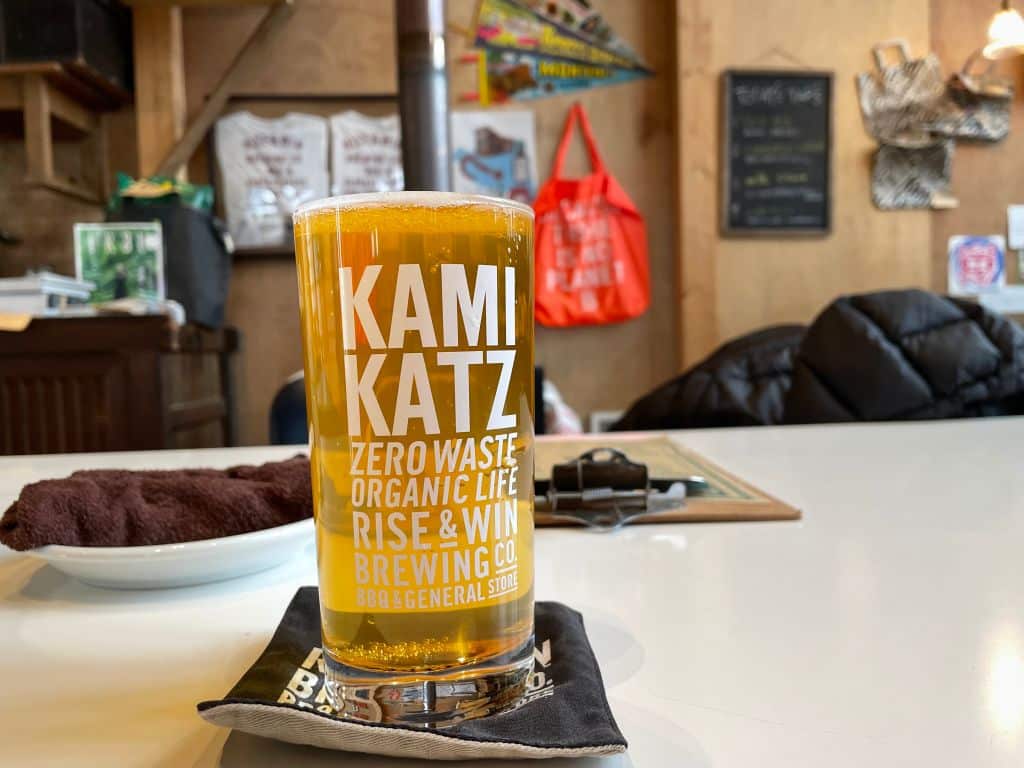 A guide for the eco beer drinker

How do you choose the greenest beer on the market?

Unlike wine – which has many more regulations and certifications that make buying a sustainable bottle simpler – beer does not have universal single certifications or labels to indicate their sustainability efforts. Some smaller initiatives are underway – Iowa has launched the Iowa Green Brewery Certification in 2017, to begin with – but choosing an eco-friendly beer generally requires more attention to individual brewery practices.

To maintain your sustainability trend, you don’t have to give up beer (it’s the most popular alcohol in the United States, after all). Many large and small breweries address sustainability in their practices and there are plenty of ways to reduce your beer-related impact at home.

Buy from breweries with sustainable practices

Brewing beer is a complex process. It requires a lot of grain, energy and water, and leaves a lot of waste in its wake. This requires malting the grain (usually barley) by soaking, sprouting and drying it, then mashing it to create the wort (essentially unfermented beer) before boiling it, ferment it and bottle it. All over the world, breweries are looking at the environmental impact of each of these production stages: an excellent reason to buy their beers rather than the others!

A study by the Oregon Department of Environmental Quality found that the beer drunk in the state each year was equivalent to the greenhouse gas emissions of 42,817 passenger vehicles. To combat this high energy consumption and associated emissions, beer giant Budweiser announced in 2018 that all US brewing would run on renewable energy. New Belgium – a sustainability leader in the brewing scene – already uses solar and wind power, captures and reuses the heat produced during brewing, and plans to be completely carbon neutral by 2030. Their famous beer Fat Tire is also America’s first. certified carbon neutral beer (and it’s very affordable). Some breweries also use innovative CO2 recovery technology – such as the Alaska Brewery – which captures and reuses the carbon dioxide released during the fermentation process.

CO2 isn’t the only byproduct of brewing. Thirty nine million tons of spent grains are produced every year by breweries around the world. Although often treated as waste, this by-product still has high nutritional value. Instead, some breweries send their spent grains to farms, where they are used as animal feed.

For brewers, water is also an important resource (after all, beer is 95% water). Depending on the efficiency of the process, as much as 10 gallons of water can be used to produce a single gallon of beer. Of the breweries dealing with their water consumption, republic of bears – one of the most water-efficient breweries in the country – achieved a water-to-beer brewed ratio of 3.5:1. To combat water scarcity, Argentina Antares brews its Átlantica beer with salt water, and others even use treated wastewater. The Village Brewery in Calgary employs innovative technologies to remove all impurities and recycle water, and New Carnegie Brewery in Stockholm has had great success with their PU:REST pilsner made from recycled wastewater.

Other producers approach sustainability from the ground up, starting with the beans themselves. Oregon’s DEQ also found that growing and processing raw materials for beer contributed 22% to its carbon footprint. Breweries following organic practices avoid the use of fertilizers and pesticides for their beans, which pollute nearby ecosystems and are toxic to vital species. Dogfish Head sources its grain from regenerative farms and partnered with Patagonia Provisions this year to create a pilsner made with perennial grain (meaning it can be harvested year after year) Kernza, which protects the soil and functions as a carbon sink.

Besides these large-scale producers, small breweries near you can also adhere to sustainable practices. The Great Lakes Brewing Company in Cleveland, Ohio, for his part, founded the nonprofit Burning River Foundation — named after the famous Cuyahoga River fire in 1969 — which works to protect freshwater resources. Many breweries also donate a portion of their profits to environmental nonprofits, like Blue Point Brewing Company, which has partnerships with different environmental organizations in the New York area and uses their profits to support initiatives. drinking water and the protection of oyster reefs. Finding sustainable breweries near you only takes a little research. Some regions could make it easier for you by identifying sustainable businesses for you; Denver has the Green Denver Certified Stickerplaced on companies that have achieved environmental certification, including breweries.

The recent boom in craft breweries has made buying quality local beer a feasible option nationwide. According to the Brewers Association, more than 9,000 breweries operating in the United States in 2021 – a 6% increase over 2020. With craft breweries in every state, you’re bound to find something closer to home than the big brands.

When choosing your brew, consider beer’s ‘food miles’ – the distance the product has to travel to reach the bar or your home, encompassing all stages from cultivation to brewing in through distribution. When possible, aim for a hyper-local beer brewed within 100 miles.

When you’re at your beer garden or local brewery, enjoy your drink in a glass rather than a can. Avoid waste (since we know most recycled products never end up being recycled) by asking which beers are on tap. Unfortunately, this is not possible everywhere; in Utah, for example, beers over 5% alcohol (alcohol by volume) cannot be sold on draft and must be packed.

Opt for kegs or growlers

For parties with a long guest list, ditch the wrapping altogether and try a keg instead. Getting a keg no longer limits you to mainstream beer! Some stores and breweries now offer kegs for all kinds of unique and craft beers. Choose a keg based on the size of your collection: a 15-gallon half-barrel or a 5-gallon six-barrel.

If your brewery of choice doesn’t offer kegs, they may offer refillable growlers: large glass jars that can be refilled over and over again. Find out which breweries in your area offer this option; some states or regions may have online resources for finding locations, such as the List of breweries in Coloradowhich offers a menu of welcoming breweries for growlers.

Also choose your beers according to the packaging. Aluminum cans are preferable to glass, which takes more energy to produce (unless it is recycled glass). Choose bulk boxes if possible — like the build-it-yourself packs available at many stores — or cardboard boxes to avoid those little plastic rings. The Alchemist, a brewery in Stowe, Vermont, ditched plastic six-pack rings for a compostable, biodegradable alternative made by E6PRthat more than 500 breweries around the world use.

If you can’t avoid plastic rings, check out the Ring Holder Recycling Program. It’s a bit like Terra cycle, and you can ship the plastic rings to them for proper recycling. It’s a good option for cleaning up after big parties, or even bars that receive beer in plastic wrappers, since they can’t be recycled through most municipal systems.

Check to see if those bigger, thicker plastic rings you might find on multi-packs can be recycled in your area, or if the retailer accepts them for reuse.

As always, put recycling where it belongs. All cans, glasses and cardboard boxes must go in their appropriate bin. Check local recycling rules to determine what can be recycled, although these materials are fairly universally accepted. Bring home cans and boxes from outdoor parties to recycle instead of just leaving them near the trash cans. Plan ahead and bring bags to carry empties so you don’t balance an armful of cans on the way home.

Linnea graduated from Skidmore College in 2019 with a BA in English and Environmental Studies, and now lives in Brooklyn, New York. Along with her most recent position at Hunger Free America, she interned at the Sierra Club in Washington, DC, Saratoga Living Magazine, and Philadelphia’s NPR member station WHYY.