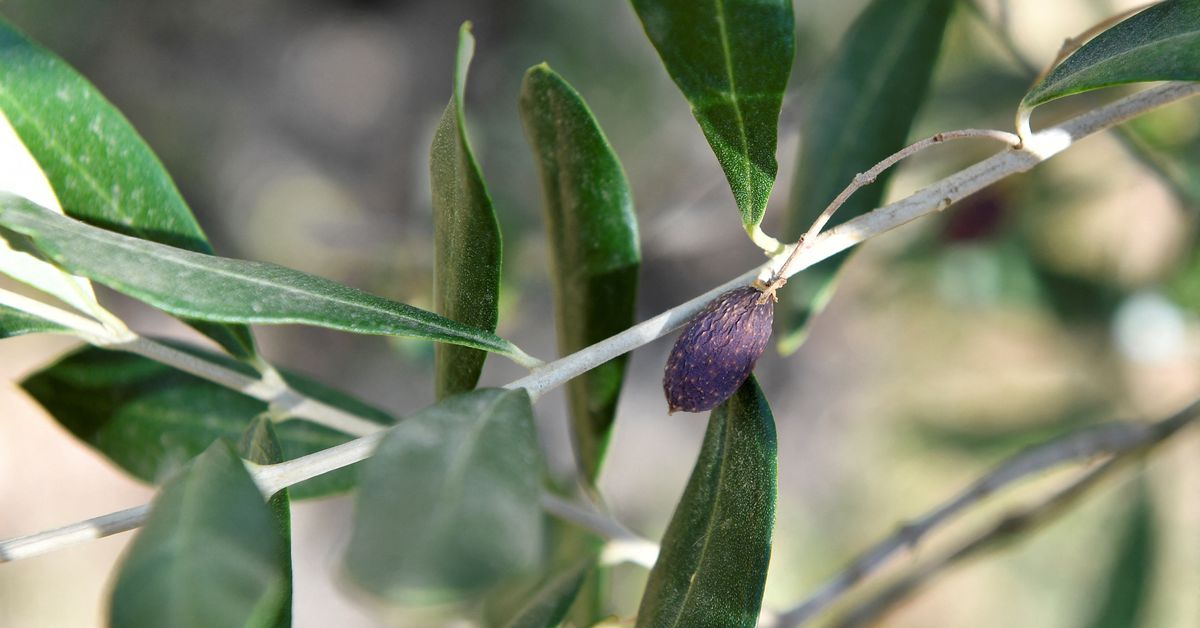 SAN CASCIANO IN VAL DI PESA, Italy, Aug 3 (Reuters) – Farmers in Tuscany, the heart of Italy’s prized wine and olive oil industry, are battling to save as much of the harvest as possible from this year of the ravages of drought and heat waves.

The lack of rainfall since spring has affected even plants that traditionally thrive in hot, dry conditions.

“We had a very dry spring with hardly any rain from March to today and this happened at a crucial moment in the transition from flower to fruit,” added Legnaioli, president of the local cooperative “Frantoio Grevepese “.

Without water, many flowers fall to the ground before they can bear fruit. And with few olives on the branches, even the sparse harvest becomes an economic headache. According to Legnaioli, this year’s oil production could be reduced by 50-60%.

A dried olive is seen on a branch, as Tuscany’s famous wine and olive oil industry suffers from a heatwave and drought, in Greve in Chianti, Italy, July 29, 2022. REUTERS /Jennifer Lorenzini

Other olive growers have decided to change their cultivation methods, opting for a supplemental irrigation system that can offset the effect of drought and scorching heat. “This year we are using, let’s say, ‘relief’ irrigation to protect the olive production on the plants while on the traditional olive trees, unfortunately high temperatures and drought are causing the loss of many olives,” explained farmer Luigi Calonaci.

The system works through a black tube that has been put in place under the trees and which spouts out small amounts of water. The Calonaci farm has also chosen to use white netting to protect the plants from olive fruit flies whose larvae feed on the fruit of the trees, a problem that is not directly related to drought but can cause a big loss of performance.

The effects of climate change not only impact production and plants, but even alter the geography and rhythms of the Italian agricultural landscape. A few years ago, olive groves were mainly the prerogative of historically hot and arid regions like Sicily. Now regions such as Valle d’Aosta in the far north of Italy, famous for its ski resorts and mountains, can produce their own oil.

Not only the heat and the lack of rain, but the climate change also affects the schedules and the properties of the wine. In Castellina in Chianti, September is normally the month of the grape harvest, as in the whole country. But with extreme and prolonged high temperatures, the bunches of grapes ripen earlier than expected.

“We have smaller grapes and expect grape counts to be lower than the average for recent years, probably in line with last year,” the consortium’s vice president told Reuters. Chianti Classico”, Sergio Zingarelli. In the Chianti region, one of the most famous for wine production, in addition to a reduction in grapes, winegrowers also have to deal with extreme weather events that do not quench the soil’s thirst but damage the cultures. “Extreme weather phenomena are getting stronger and stronger,” said Paolo Cianferoni, owner of the “Caparsa” winery.

“A few weeks ago, a hailstorm destroyed 40% of the grapes here. Fortunately, the quality of the grapes was not affected, so we will see what happens.

Georgia, leader among organic wine exporters in the United States