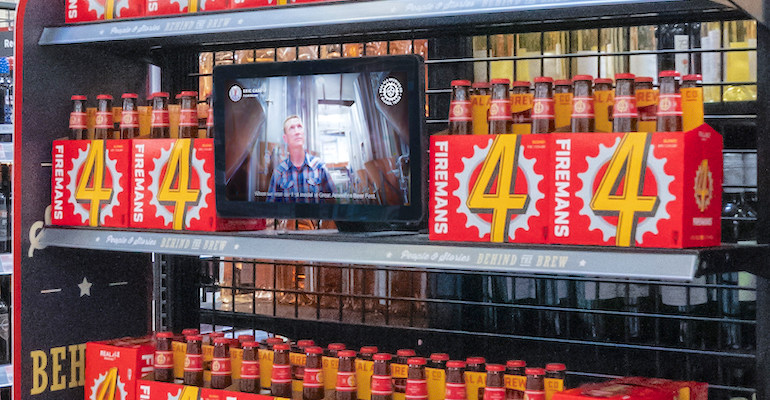 HEB has deployed the smart “storytelling” tablets of the start-up The Looma Project in the beer and wine sections of 120 stores.

The Looma’s Loop platform, based in Durham, North Carolina, includes a network of in-store tablets that play short human-centered videos at the point of sale to give shoppers a picture of the people behind the brands on the shelves . In announcing the HEB launch yesterday, The Looma Project noted that the Loop model brings authentic content and more transparency to customers in the adult beverage category.

Related: Schnucks deploys videos delivered on tablets in the beer and wine departments

Texas grocer HEB, with more than 360 stores, represents a new market for Looma, which so far has more than 1,000 active tablets in its retail programs. Retailers that employ Loop for their beer and wine sections include Midwest grocer Schnuck Markets and Carolina-based supermarket chains Harris Teeter and Lowes Foods.

“Working with HEB has been an immense privilege,” Looma founder and CEO Cole Johnson said in a statement. “The care and attention to detail with which they assessed our partnership from day one confirmed Loop’s effectiveness and product market fit, while providing us with industry-leading guidance as we sought to refine and to develop our offer.”

Related: FreshDirect gets its fresh produce message on track

Loop is intended to connect and educate customers at the time of the shelf decision, rather than “overtly advertise,” according to Looma.

Loop’s video platform is designed to shine a light on the people and stories of select beer and wine brands, increasing shopper engagement and driving more informed purchasing decisions, according to Looma. Content includes the stories behind local and regional brands as well as information on specific products, such as nutrition, tasting profiles, suggested food/beverage pairings and certifications for sustainable practices.

Looma noted that by aiming to connect and educate customers – rather than overtly advertise – Loop sets itself apart from other decision point content providers by providing a “real, human protagonist” and ” authentic and unscripted stories”. Additionally, according to the company, Loop helps differentiate the physical experience from the practical benefits of e-commerce by focusing on discovery, education, and “a sense of connection.”

St. Louis-based Schnucks started rolling out Loop tablets in the beer and wine sections of 89 stores last summer. Looma launched its platform with The Kroger Co.’s Harris Teeter in 2018 and has since more than doubled the number of stores in the Matthews, North Carolina-based chain using tablets. Winston-Salem, North Carolina-based Lowes Foods, part of Alex Lee Inc., began its partnership with Looma in November 2019 with the rollout of Loop tablets to 50 stores. Additional pilots are underway and scheduled at new and existing retail partners within and beyond the adult beverage category, Looma added.

Brands see sales growth double during a Loop video campaign, followed by 25% growth the following month and 12% over the following six months, Looma reported on its website. Similarly, retailers sell 51% more items for featured brands in Loop shelves at one end of an aisle, and 60% of shoppers who buy a featured Loop product are trying it for the first time, the company said.