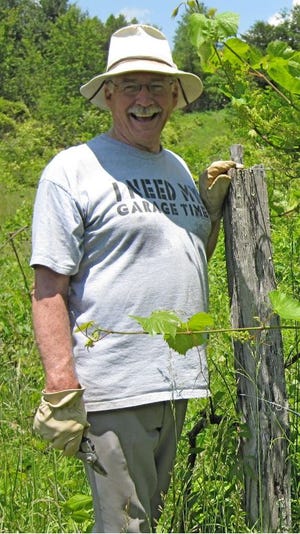 MARSHALL – Chuck Blethen has traveled more than 5 million international business miles during his time in the technical instrumentation industry. Throughout his travels abroad, Blethen – the owner of Marshall’s Jewel of the Blue Ridge Vineyard – developed an affinity for trying all kinds of wines, beers and spirits in every country he visited.

Now he has published his third book on the subject, “The World’s Largest Collection of Country Wine Recipes.”

Blethen’s first book, “The Guide to Wine Etiquette” was published in 2007, while his next book, “Entertaining With Wine” followed.

His latest book was the most enjoyable to search for, the author joked.

“It was my favorite, of all the experiences and places I had tasted, tested and made wines,” Blethen said. “That really interested me. That was definitely the most fun – getting the information to write the book. I have to laugh because everyone asks me, ‘What’s your favorite wine?’ I tell them it depends on the country you are in.”

The book contains 195 country wine recipes and 240 versions in total, as some recipes have more than one way to prepare them.

Blethen and his wife, Jeannie, who edited the book, founded the vineyard 12 years ago, Blethen said.

“We bought it with a specific idea in mind to plant grapes,” he said. “Along the way, we discovered the cold-resistant Muscadine (plant) here. So I spent three years figuring out how to propagate them so that I could populate my entire vineyard with them. In recent years, we have been able to obtain quantities businesses to make preserves and other things.”

According to Gem of the Blue Ridge site“grapes form a large, steep, cold-hardy crop that can be grown naturally, organically, or biodynamically from which important phytochemicals can be derived for the nutraceutical industry as well as other traditional grape products.”

The vineyard is also hosting virtual classes at its Mountain Grape School, with classes on grape products and processing and the propagation of Katuah Muscadine, among others, scheduled for March and April.

For Blethen, he gained early experience in winemaking and foraging while growing up near Bald Knob, West Virginia.

“My mother taught me how to grow mushrooms and find berries in the woods,” he said. “My dad, once or twice during the summer, he always had a five gallon jug of beer brewing behind the wood stove in the corner of the kitchen. So I grew up with that. My uncle was a moonshiner , and I worked with him when I was 12. I didn’t know it was against the law.

Blethen joked that his family “were so angry that we had to enjoy the sun as well as the moonlight”, adding that he still lived by the values ​​instilled in him by his family and neighbours.

“I had two pants and two t-shirts. You wore one and you washed one. That was it,” Blethen said. “My dad was a coal miner for 42 years. He got me a job for two summers there, and I would do anything not to have to do it again. But he taught me the value of honesty and hard work, and if you told someone you were going to do something, you would leave no stone unturned to make sure it happened exactly as you said it would.”

Some of these neighbors taught Blethen a lot about winemaking. Now, instead of a “hillbilly,” these friends call him a “William of the mountains” because he’s an “educated hillbilly,” he said.

“Along the way, we started to meet these people up there who were making dandelion wines, and that was exactly what they did. These old people from the country who came here brought all these abilities and that know-how with them, and all is lost now,” Blethen said.

In writing his books, Blethen said he hoped to shed light on the many different ingredients that wine can be made from.

“Everyone thinks you say ‘wine’ and you think grapes,” he said. “You can make wonderful wines from things like mushrooms, oak leaves, marigolds, and different kinds of vegetables, etc. It’s amazing. When I was researching some of the recipes, some people I had met in Australia and New Zealand Zeeland advised that these countries have clubs with over 450 people, such as the Sydney Club, all they do is make country wines – they don’t of grape wines. England has four or five major country winemaking organizations. So it’s not a rare thing, but it’s in this country.”

“The World’s Largest Collection of Country Wine Recipes” is now on sale on the Jewel of the Blue Ridge website and in their farm store for $34.