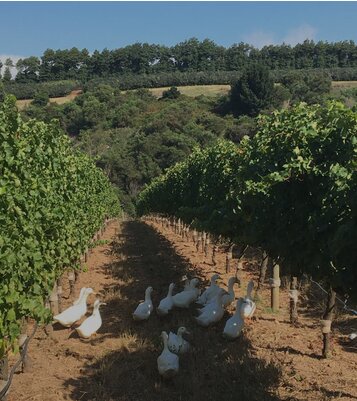 South Africa lost one of its only two certified biodynamic producers (the other being Reyneke) when Radford Dale bought Elgin Ridge late last year. However, a few biodynamic practices will continue in one form or another, notably the composting program for agricultural inputs, including chicken manure. Ducks are still delightful additions and they will play an increasing role, helping to reduce snails, but sheep and cattle are no more. The farm’s certified organic farming and winemaking will continue. It was one of the big attractions of the place for Alex Dale and his team that the vines had been grown organically from the start – rather than being converted – when ex-Londonians Brian and Marion Smith started to turn an apple farm into vineyards after buying it in 2007.

The property, now called Radford Dale Organic, is in a particularly pretty part of Elgin, it struck me when I visited last week (although when I mentioned this I was told that all Elgin is pretty!). Lots of usefully varied trails as well as lovely vistas. It’s on Appletiser Road, a name that would suffice as a reminder of the fruit that dominates the local economy even if the ubiquitous apple orchards didn’t do it even more adamantly. It was fortunate for the Cape wine industry that the local apple industry had been in crisis long enough for the grapes to plausibly take hold – we would be much poorer without Elgin wine.

Radfod Dale, based in Stellenbosch but so far without vineyards and buying lots of fruit, is no stranger to Elgin grapes. “We had explored the wine regions enough to know where we wanted to be,” says cellar master Jacques de Klerk. So the momentous decision to take this 20 ha farm, with just over six hectares of established vineyard, came with the experience of the cooler climate, as well as the long-standing desire to expand and deepen the R&D work with organic fruit, complementing established minimalist winemaking. (To see the website for more.) In fact, says Jacques, the contact with the Smiths, ultimately leading to the purchase, began when he came to pick up organic pinot noir – something of a rarity, though important to Radford Dale , given that pinot is a growing product. category for them.

So while the deal was being finalized, the new owners started working on the farm last June, just in time for pruning. The eminent Kevin Watt will remain as wine consultant. Gerhard Joubert, who had worked with Jacques in the Stellenbosch winery for around eight years, is in charge of the organic winery here and is also the farm manager. Together they will oversee the Radford Dale Organic planting program in Elgin. Pinot and Chardonnay, and Gamay, which has already become something of a specialty for RD, should enter the ground over the next few years. These will amount to two hectares. After that, other plans for available land will emerge. Incidentally, the Sauvignon Blanc grapes that were the core of Elgin Ridge’s production will all be sold – this is not a grape used in the already quite extensive RD range. There is some fairly young Cabernet Franc from which a few vintages have been made, and they should be promising a bit older.

The new owners will also develop the visitor side. While most of RD’s wines, including the Winery of Good Hope and Land of Hope ranges, will continue to be made in the rented Stellenbosch cellar, this will become the brand’s home, complete with a tasting room ( there is a glass wall overlooking the winery) currently under development.

Two 2021 wines from the emerging Radford Dale Organic range were made from grapes grown on the farm – prior to purchase, they were therefore vinified in the small organic cellar at the Stellenbosch headquarters. I tasted them last week, with the first wine in this range, a single small bottling of 2020 Chenin Blanc from Stellenbosch – characterful and pleasant, fresh and rather salty-earthy. The two new wines, bottled but not yet labeled, are due out later this year.

The 2021 Radford Dale Organic Chardonnay is also fresh, but rather more elegant, with a slight – perhaps a touch too light for my taste – finesse at 11.5% alcohol. Last year and this must count as “learning years”, the team admits, and while this wine is undoubtedly a good wine, with a nice inherent structure, Gerhard thinks the 2022, picked a little more mature, will have a little more useful richness. and flavor.

No need to nitpick with Freedom Pinot Noir – a well-established wine, but as of 2021 sourced entirely from these vineyards and under the Radford Dale Organic label. And, of course, from the 2022 vintage, it’s made in the Elgin cellar. It’s been a few years since I’ve tasted Freedom Pinot, but it struck me as having a new charm as well as a certain austerity – and the charm of youth is perhaps something more easily associated with pinots. of Hemel-en-Aarde than Elgin. Fermenting the whole berries is something that helps with this, the winemaker says. It is already a rather greedy wine, with a succulence as well as a fresh elegance.

“Organic Pinot,” says Jacques, “when done well, will always be a cut above.” Maybe he’s right. There seems to be a lot to expect from organic viticulture in Elgin.

The 10 Most Popular Wine Brands in America