The sale includes around 12,000 head of cattle, mostly Red Brahman cattle with some Droughtmaster influence. No price has been communicated.

Balfour has been owned and operated for six years by wealthy Chinese businessman Xingfa Ma TBG Agri, the Australian arm of his Tianma Bearing Group, which originally bought the property in December 2014 for $18 million, including 40,000 head of livestock. At the time, Balfour had been transformed into one of the best cattle ranches in the state by veteran pastor Don Hoar. TBG Agri has since made significant capital investments in improving infrastructure.

TBG announced its intention to sell Balfour in March last year. Expectations at the time suggested the property could fetch between $32 million and $40 million, but the northern real estate market has seen a strong upward trend since then.

Balfour has a modern infrastructure including a newly constructed farmhouse, staff quarters, sheds and steel stockyards with a capacity of 3,000 head.

Harvest Road is the beef division of Forrest, which includes the Harvey Beef brand, is WA’s largest beef processor and has a state-of-the-art processing facility near Harvey, a large pen-and-portfolio based intensive feed facility of northern grazing properties.

The sale represents only the fourth time the property has changed hands in the past 100 years. It is the birthplace of the famous Australian writer Doris Pilkington, author of Follow the Rabbit Proof Fence.

In a statement, the chief investment officer of Forrests’ Tattarang investment arm, John Hartman said Balfour would be an important part of Harvest Road’s integrated beef supply chain business and a strong commitment to the highest possible standards of environmental stewardship and animal welfare.

“For over a century, Balfour Downs has played an important role in the development of the Australian beef industry. We are committed to preserving this heritage and investing in its future to further enhance the estate’s status as some of the most productive pastoral land in northern Western Australia,” said Mr Hartman.

Harvest Road Operations Manager for Pastoral, Backgrounding and Feeding Facilities, Ben Dwyer paid tribute to the former owners of Balfour Downs and their investment in key infrastructure, including the development of impressive cattle and livestock facilities. 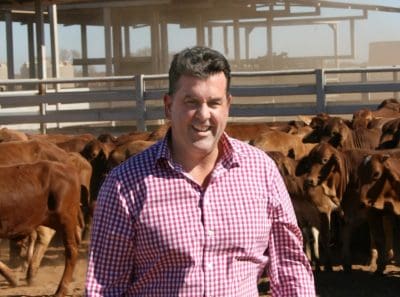 “The acquisition of Balfour Downs is part of our long-term investment in the future of WA’s beef industry and our commitment to developing a world-class network of integrated supply chain assets across the state,” Mr. Dwyer said.

Managing Director of TBG Agribusiness Andrew Blyth said he was happy to see the legacy of Balfour Downs continued by the Forrest family.

“Over the past six years, the TBG Group has proudly operated Balfour Downs, investing in its future and reinforcing its status as one of Northern Australia’s most respected ranching stations.”

The planned transaction by Harvest Road is subject to approval by the Government of Western Australia.

Balfour has been owned and operated for six years by wealthy Chinese businessman Xingfa Ma TBG Agri, the Australian arm of his Tianma Bearing Group, which originally bought the property in December 2014 for $18 million, including 40,000 head of livestock. It has since made significant capital investments in infrastructure.

TBG announced its intention to sell Balfour in March last year. Expectations at the time suggested the property could fetch between $32 million and $40 million, but the northern real estate market has seen a strong upward trend since then. The original offer consisted of 16,000 cattle.

Two years ago, Balfour seller Jack Ma sold his 705,700 ha of Wollogorang and Wentworth Stations, which straddle the Queensland/Northern Territory border, for $53 million (WIWO including 30,000 head of Brahman cattle and a complete station factory).

He had held the extensive grazing properties in the Gulf of Carpentaria district for just under four years.

Mr Ma acquired Wentworth and Balfour cattle operations with the aim of supplying beef to China, including live exports and processing in WA, having established a supply and distribution network of quality local wines.

“Unfortunately it was difficult to own the whole value chain and therefore the livestock part of the beef business is being divested,” he said.

“TBG will now refocus on businesses where it can add value. However, the love affair with Australian agriculture is far from over.

The company’s 8,000ha Emu Downs station further south near Cervantes, which is used to finish cattle from the Balfour ranch, will be Mr Ma’s only remaining livestock asset.

However, Mr Blythe ruled out selling Emu Downs when the Balfour sale was announced last year.

“Absolutely not. It is an asset and the centerpiece of TBG’s farming business. There are future plans for Emu Downs,” he said.

Although Mr Blythe is not trained in the details, proceeds from the Balfour sale could be invested more in finishing cattle at Emu Downs and sending canned meat to China.

The Balfour Downs property, about a tenth the size of Tasmania, comprises a vast country of rivers, streams and canals, opening onto large floodplains covered in Mitchell grass, Flinders and of buffalo.

Located in one of WA’s richest mining regions, the grazing country is rich in minerals and there is no need for supplemental feed as the country enjoys a high level of nutrition giving the cattle a high fertility and weight gains.

Do you want to be a chicken catcher? Or a meat worker in Timaru?