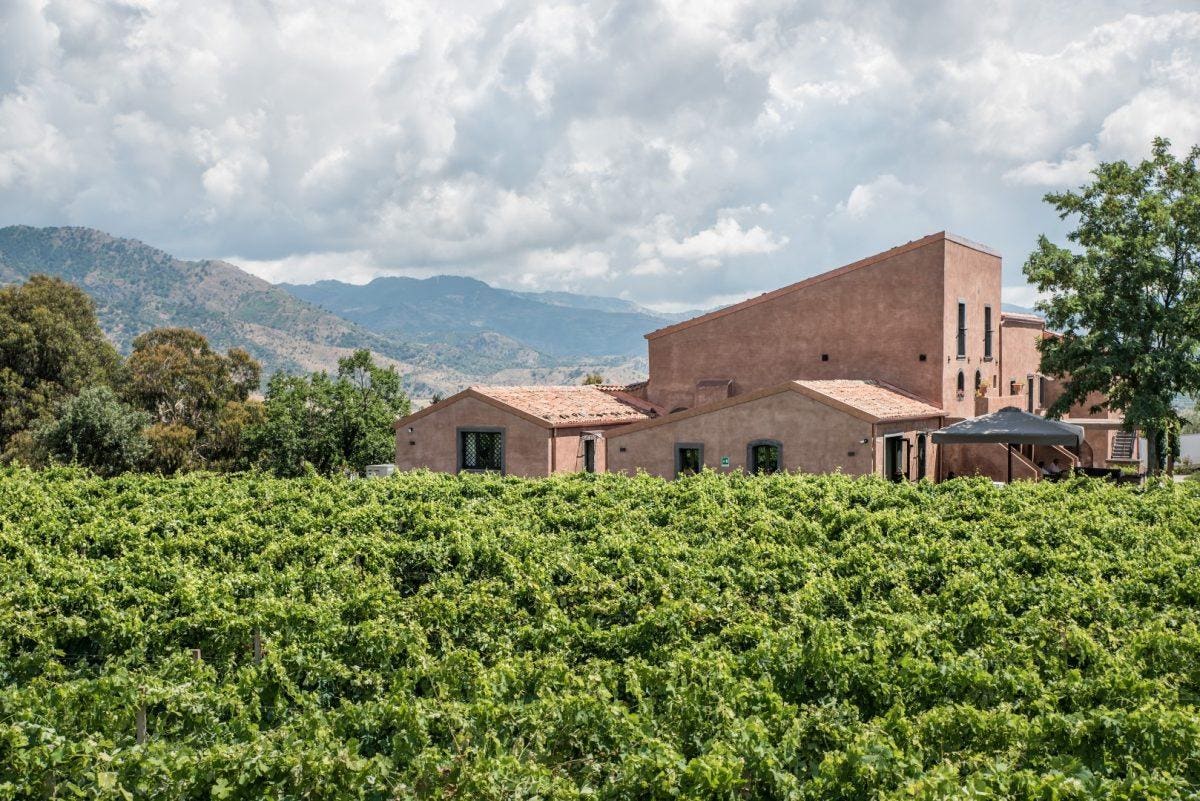 Why Mount Etna in Sicily is a hotspot for wine production

Between 1786 and 1788, the German philosopher Johann Wolfgang Goethe traveled all over Italy. He then wrote his book titled, in Italian, Viaggio in Italy-Where, Italian travel. After passing through Verona, Venice, Rome and Naples, he explored the island of Sicily and wrote that to understand the whole country of Italy, â€œSicily is the key to everything.

Italy is divided into 20 administrative regions, the southernmost being the island of Sicily. The region contains both eight percent of Italy’s land area and eight percent of the country’s total population. The east of the island is distinguished by the largest active volcano in Italy, Etna.

When he saw Mount Etna in early May, Goethe noticed how “the snow spreads widely around the mountain and presents insurmountable obstacles”, and noted how the locals recommended him to ride a horse to see the remains. from the famous volcanic eruption of 1669, when magma flowed all the way to the city of Catania, 16 kilometers (10 miles) away. Ever since Goethe witnessed these gnarled volcanic slopes and published his book, Mount Etna’s topography has been constantly changing. Another eruption in 1852 produced over 2 billion cubic feet (56 million cubic meters) or debris that covered three square miles (7.7 square kilometers) of land, while in 1979 an eruption began that lasted for 13 years .

(The publication of Goethe’s book – by the way – apparently influenced a number of German winemakers to move to the eastern part of Sicily, where they practiced viticulture on the slopes of Mount Etna.)

This volcanic whim of Etna means that its shape, height and geology have changed many times due to countless eruptions over the past millennia. One of the results is the richness and diversity of soil types along its slopes.

The wine appellation for Etna, or Denominazione di Origine Controllata (DOC), was established in August 1968. On a map, the shape of this demarcated region looks like a backward “C” that wraps around the northern, eastern and southern parts of this volcanic cone. When this map is overlaid with a map showing soil types, it turns into a conglomerate of rainbow colors – green, orange, amber, blue, purple – each indicating different varieties of particle types.

In addition to having rich soils, the height of Mount Etna – 10,912 feet (3,326 meters) above sea level – combined with its proximity to the Ionian Sea provides this land with a wide range of microclimates.

This combination of diverse soils and abundant atmospheric conditions makes the slopes of Etna a playground for winegrowers. Yet their job is not easy: summers can be scorching, while winters crush the landscape with snow and rain. The topography prevents mechanized harvesting, and manual harvesting can be difficult on sloping land.

Although DOC was established in the 1960s, it is only in the last few decades that the influx of international (and mainland Italians) wine growers has exploded into the region. The complex geology and the profusion of microclimates on the slopes of this summit have attracted winegrowers from all over the world.

â€œEtna wine is a new phenomenon. It’s like the Bolgheri region in Tuscany, â€explains Chiara Gullo, who works in the marketing of Sicilian wines. â€œBut,â€ she added thoughtfully, â€œpeople have been making wine on Mount Etna for centuries.

How attractive is this land?

Etna DOC has an area of â€‹â€‹approximately 2,350 acres (950 hectares) and is home to 289 wine producers. Land has become expensive – around $ 70,000 an acre (â‚¬ 150,000 / hectare) in some areas. Historically, wines produced around Mount Etna were generally shipped to other countries as blending components for wines; today, Etna wines have their own pedigree. Less than 10% of the production of this DOC is now used as bulk wine.

Etna DOC’s red grapes include Nerello Mascalese and Nerello Cappuccio, while the whites include Carricante, Catarratto and Minella Bianca. Nerello grapes are genetically related to Sangiovese and produce generally well-structured and tannic wines. Carricante is originally from Sicily and produces light and acidic wines, while Catarratto produces fuller white wines which can include herbal and tropical aromas.

In addition to its range of soil types and microclimates, there is another notable historical and biological quirk associated with viticulture on Etna. The local thin volcanic soils, of almost sandy composition, did not allow the phylloxera louse to develop here, so many vines along these slopes were spared from decimation when this louse wiped out the majority of the vines in the area. ‘Europe in the latter 19e century. Certain pre-phylloxera vines, now 150 years old, identified by dendrochronological analysis, were used to produce new vines not grafted on rootstocks resistant to phylloxera, as are still the majority of vines in Europe.

In addition, noticeable diurnal temperature variations along the slopes of Etna give DOC the ability to produce sparkling wines of brilliant acidity.

Federico Lombardo di Monte Iato is the COO (and contributing winemaker) of Firriato wines, which has a winery based near Etna. He spoke about the region.

Sicily is like a continent. Worldwide there are 12 orders of soils. Sicily has seven. In our opinion, Etna is not just one land. The rocks are rich and it really is mountain viticulture. Very deep soils mean very important median ages for the vines. The vines for sparkling wines can be between 50 and 60 years old.

Di Monte Iato obtained his MBA before working as Director of Information Security for Italian Railways. He then met his wife, the daughter of the owner of Firriato wines, during a wine tasting at Chateau Cheval Blanc in Bordeaux. He is a lively and energetic individual who not only works with the vine and all aspects of production, but constantly travels the world to tirelessly promote the terroir of Etna.

Today Firriato owns six estates throughout Sicily (including one estate with hospitality facilities on Mount Etna) and exports the majority of its production to four dozen countries.

The range of wineries within Etna is diverse (I reviewed wines from another regional producer in a recent previous article). Representative wines from the slopes of Etna de Firriato that would score in the mid-90s on a 100-point scale are highlighted below.

This DOC Etna red wine is made from ancient bush vines of Nerello Mascalese and Nerello Cappuccio grapes growing on the northeast slope of Etna, and is aged in barrels for one year. The nose includes strong aromas of plums, as well as green pepper and Oreo cookies. On the palate: black cherries, Malteser chocolates and prunes. A fresh and lucrative palate that coats the cheeks with a citric film. It is apparently their best-selling wine in the United States.

This unique Etna DOC vineyard white wine comes from 45- to 60-year-old vines of Carricante grapes blended with Catarratto grapes grown at an elevation of approximately 2,460 feet (750 meters) on the northeast slopes of Etna. It includes aromas of candy, balsamic and flint. On the palate, it is smooth with, as COO Federico Lombardo di Monte Iato said, “the markers of a volcano: sulfur and smoke”. It is a balanced and coherent trail of retained tropical fruits.

Made from old Nerello Mascalese red grapes grown on the northeast slopes of Mount Etna and bottled for 30 months, this reflects how ideal the terroir along Mount Etna can be for producing sparkling wines, due to marked diurnal variations in temperature. The nose is lively, nervous, creamy with a hint of strawberry aromas and as invigorating as a sparkling wine from the highlands of Trentino in northern Italy. This acidity is due to the high level of malic acidity in the grapes.

Made from 150-year-old pre-phylloxera vines on the estate, determined by dendrochronological analysis carried out at the University of Palermo, it is aged for two years in 700-liter vats, then for another 18 months in the bottle. Only 3,500 bottles produced. This ruby â€‹â€‹red includes a deep and dark nose of black cherries. The taste is ripe and includes a length that asks you to drink more, opening up your salivary glands for a main course.

Bonterra launches organic Californian wine in a can