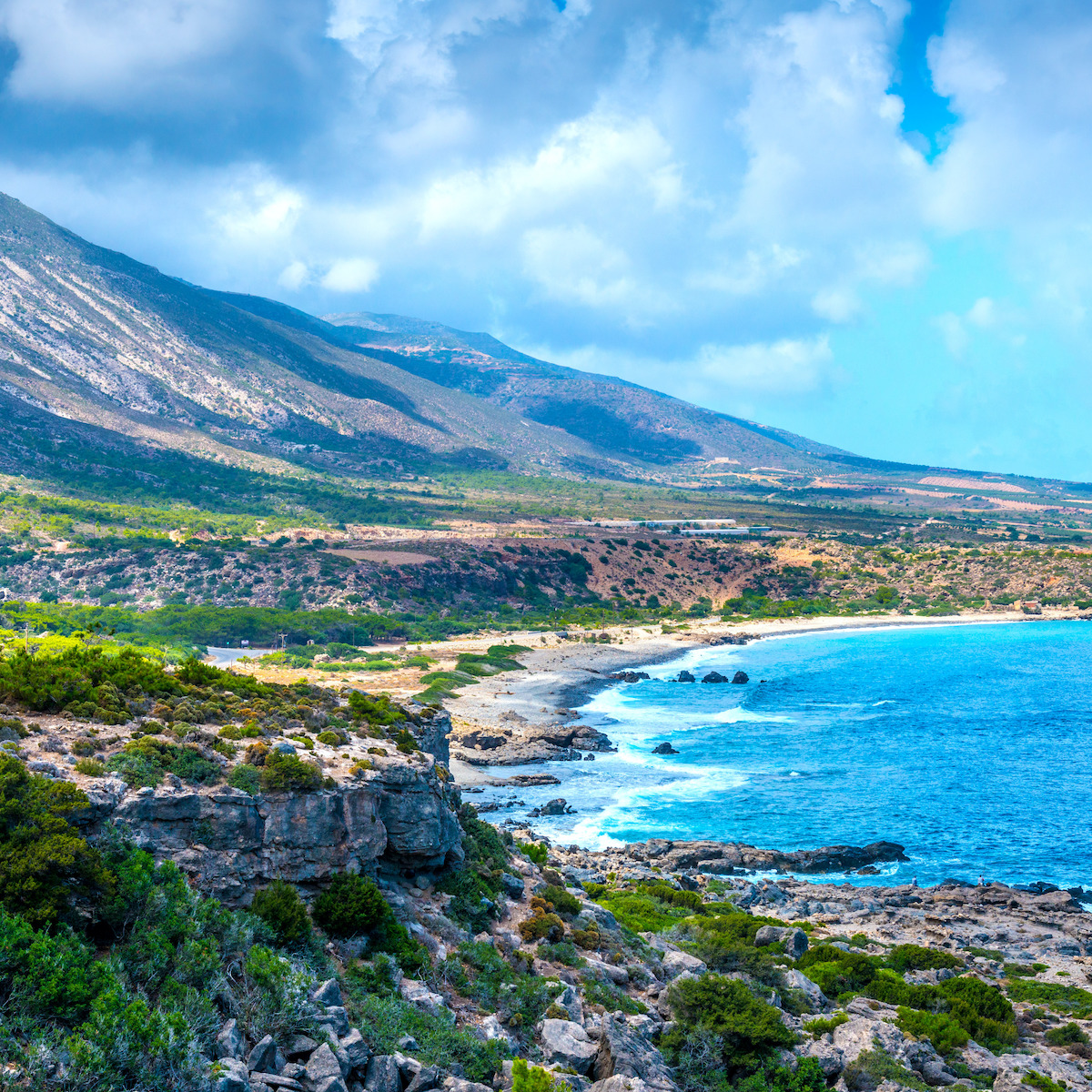 With over 220 inhabited Greek islands out of over 6,000, there are pros and cons to picking one to visit at any time of the year. There are advantages because there are so many islands to choose from, all with their own unique style. This can also be a downside, because which one should you settle for?

My article, 7 Gorgeous Greek Islands You Must Visit, may help narrow down that process, but my tenure in this beautiful country has unearthed even more amazing places. Some are large with excellent infrastructure, good air links and often more than one port. Others are smaller, offering a more traditional experience, while taking a bit more time and patience to achieve – it’s always worth it.

Here I share with you why these six beautiful Greek islands are my favorite in Greece. I deliberately chose a cross section of tourists, but not lacking in authenticity for the lesser known – at least for the majority of international tourists. Come and be tempted enough to pull out that credit card and book your trip to visit Greece as soon as possible.

The southernmost island of Greece, and the largest, Crete has two main airports – Heraklion and Chania – for domestic and European connections as well as ports in these cities as well. This makes it a popular year-round destination. Despite its crowds of tourists – especially in the summer months which are drawn to Crete’s many beaches and mountain villages – Crete remains one of my favorites as it offers such a variety of things to see and do. .

Want to flop on the beach all day? No problem. Secluded Elafonissi Beach in the southwest corner of the island, with its shades of pastel pink sand and azure waters, will make you feel like you’re in the Caribbean. Balos Beach, surrounded by rugged scrubland and rolling hills, is another favourite. You will often see its white sands and blue waters adorn Crete travel brochures.

If hiking is more your thing, the famous Samaria Gorge – nestled in the White Mountains National Park and Europe’s most famous and longest trekking gorge at 10 miles – is best hiked in the cooler months of spring and autumn.

History and tradition buffs will adore the Venetian port, explore the old cobbled streets of Chania and marvel at one of the oldest lighthouses in the world. The less-visited town of Rethymon has an equally impressive, if not larger, harbor where the colorful fishing boats and Venetian architecture will have you snapping photos with your camera.

Let’s not forget Greek mythology and a visit to the palace of Knossos, 5 km from Heraklion. It is the capital of Crete where you can discover the ancient Minoan civilization, considered even older than ancient Greece. A boat trip from the exclusive Elonda or the fishing village of Plaka takes you to the quirky island of Spinalonga – now long abandoned but originally a leper colony until 1957. Admire the stone houses still standing, some even with their lace curtains still intact.

One thing is certain, Crete does not disappoint as an island to visit. Learn more about Crete here.

In the southeastern Aegean, the Dodecanese islands are known for their medieval castles, Byzantine churches, beaches and ancient sites. The capital of this chain of islands is Rhodes. Despite its large size – attracting many visitors throughout the year due to its international airport with numerous domestic and European flights – there are several hidden gems on this eclectic island.

You can’t miss the Old Town of Rhodes – a UNESCO World Heritage Site and a continuously working old town, meaning people still live and trade behind and within its castle walls. Dating back to the 14th century knights of the time of Saint John, you will find over 200 streets and alleys, many of them cobbled and winding, designed to confuse the minds of invading pirates of the past.

Treat yourself to a stay of your choice from several unique boutique hotels in the Old Town to truly immerse yourself.

Marvel at the architecture found along Knights Street and the Palace of the Grand Masters, or stroll atop the ancient castle walls. Wear sturdy shoes!

Leaving the ancient old town and driving inland will bring you to the Profitis Ilias pinewood. Here you will find the abandoned mansion and planned summer residence of Mussolini, the Italian dictator. The forest itself sits atop 2,618 feet above sea level and offers spectacular views. It’s a nice day trip away from the crowded beaches.

Learn more about why to visit Rhodes. Especially with its ease of access, put Rhodes on your list of favorite Greek islands to explore.

Off the west coast of Greece in the Ionian Sea are the Ionian Islands, one of the most popular being Corfu, or Kerkyra in Greek, which is very close to the Albanian coast. It is rugged, mountainous and surprisingly lush and green due to heavy rainfall during the winter months. You can also find several luxury resorts along the coastline.

Boasting an international airport accepting both domestic and international flights and a large port, it is very busy, like any Greek island with such transport hubs. Similar to Rhodes and Crete, however, there are hidden places to be found away from the tourist crowds that will make you fall in love with this sickle of an island (Corfu’s shape resembles a sickle).

Above all, be sure to spend some time exploring Corfu Old Town. The island’s architecture reflects its checkered past of Venetian, French and British rule. Corfu Town, the capital of the island, has two Venetian fortresses. There is one of each in the Old and New Town, medieval lanes and cobbled streets, resembling a set of game of thrones.

From pebble to sand, organized with sun loungers, umbrellas and water sports, to secluded beaches surrounded by pine forests and olive groves, there are many hidden beaches and coves/bays to choose from. Try Rovinia beach on the northwest coast and explore it by boat if possible.

Meat lovers will love the Corfu dish from sofrite — veal cooked in wine, garlic and white pepper or simple “farm” dishes such as zucchini or cheese pies. After all, before tourism, Corfu was – and to some extent still is – an agricultural island.

For me Paxos is a hidden gem in the Ionian Islands. To reach it, you need to take a ferry of up to an hour from Corfu. Or, as the island offers some fairly exclusive private villas, many also offer private water taxi transfers.

There is a range of things to see and do on this tiny 30 square mile island. If you are thinking of relaxing in a less crowded destination, you have chosen the right place. There are many beaches to choose from. Located in the south of the island, Mongonissi is a small island connected by a causeway just 2 miles from the capital, Gaios, with rocky vegetation and a small sandy beach.

At the northern tip of the island, near the lighthouse, Plani is a wild, windswept beach with large boulders visible from the lighthouse. Park here then walk down or access it by boat.

A few minutes drive from Faros you will arrive at the picturesque traditional port of Lakka with good tavernas and blue water which makes Paxos a dream island.

The small port of Longos is notable for its old olive oil processing factory, now an exhibition space. It’s a great place to take a boat trip and drop anchor for a coffee or lunch.

The bustling new port town of Gaios offers plenty of shops, tavernas, beautiful blue-green hues in the water, and a laid-back, laid-back vibe.

Overall, Paxos is a more sophisticated Greek island to visit and spend time in, offering a relaxed alternative to the busier chain islands of Corfu and Zakynthos.

A small domestic airport connects this unique Greek island to the mainland, and Ikaria is well worth a visit.

One of five blue areas in the world, the name of the island comes from Greek mythology. Icarus, the son of Daedalus, made leather wings to fly. Icarus created wax wings to fly higher and, despite his father’s warnings, flew too close to the sun and melted his wings, plunging him into the sea. The place where he fell is believed to be the place where the island was formed.

You will find long stretches of beaches, wild landscapes, genuine people and phenomenal cuisine. It’s a blue zone due to the fact that it’s a place where people live the longest and healthiest lives – essentially “forgetting to die”. This is due to the environment that allows people to live and exercise outdoors more, have a strong community spirit, enjoy a plant-based diet with meat eaten in sufficient quantity and to take frequent naps/naps.

From sandy and pebbly beaches to wine tasting tours and the unique mountain village of Christos Raches, there are an abundance of experiences to be had in Ikaria, making it one of my favorite beautiful Greek islands. Here, the population sleeps during the day and opens from 6 p.m.

The northernmost island in the Cyclades chain, Andros isn’t exactly on the international radar. The fact that it is only a few hours by ferry from the Athanian port of Rafina makes it a perfect getaway for a weekend or more. Moreover, its proximity to other islands of the Cyclades such as Mykonos, Paros, Naxos and Syros makes it an ideal base for visiting the islands.

Greeks love to come to Andros for its lush vegetation and rugged landscape. Additionally, the island has more than 60 beaches, 40 of which are accessible by dirt or paved roads, with some best visited by boat.

The island has a rich maritime history and many shipowner families are from Andros. This is evident in the grand mansions and architecture seen across the island.

You don’t have to be religious to appreciate the splendor of one of the six Byzantine monasteries. Throughout the year, Andros offers walking and hiking routes, many of which are marked and allow you to admire monasteries, the ruins of ancient temples or views of the Aegean Sea.

The fact that the island has a rich cultural heritage – and has no airport – means Andros has escaped mass tourism and offers a more sophisticated traditional Greek island appeal.

If you’re planning a trip soon, be sure to read all of our Greece content, including: